There are at least two documents labelled "Traveler's notes":

These notes are looted from remains found on a wrecked ship off the coast of Undvik. Reading the notes launches the quest Cargaison précieuse.

I swear, not in my whole life have I ever seen such waves. Ten, twelve, fourteen feet! And the wind – why, it shook the mast and battered the sails so there were near about to fly off. Rocks everywhere, currents treacherous... Helmsman said we'd pull through, that he'd seen worse and come out all right. Me, I'm not so sure. If the storm don't calm soon, this tub's going to break in two. 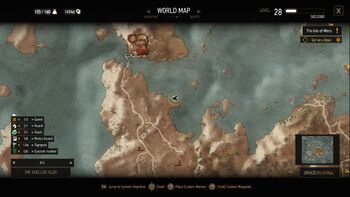 These notes are found on a frozen skeleton inside the first house Geralt encounters in the Ice Plains.

The worst part? The all-encompassing quiet. It seems there is not a living soul around - only snow, snow, everywhere snow, as far as the eye can see. Though sometimes we find people still alive in their homes. Everyone is hungry, everyone is frozen to the bone, but no one refuses help. They let us warm ourselves by their fire and regain some strength before we move on, towards the lighthouse. They say food supplies there have not yet run out.